I wrote a book on improving your dev skills and landing a job! Learn more →
Home Newsletter Blog Book

I always like looking back at a year gone by. It's a way to remember what happened - the good parts, the bad parts, and anything in-between.

It's also a nice time to reflect on the major changes that happened in your life, the learnings you've made, and what to bring with you for the future.

Naturally, the pandemic has played a big role this year. Not only for me, but for the entire world. Despite the personal implications, the separation and feeling of loneliness caused by Covid, this year has been great for me on a professional level.

Some of the major highlights include:

All the time at home also helped me reflect and realize what's important to me. I relied heavily on friends and family, especially online, to keep me sane during the long stretches of working from home. We're still not on the other side, but without the ability to hang out with my friends on programs like Discord and Zoom, 2020 would have been a lot harder to get through.

In September, I got a new job as a front-end developer in a digital agency. This was very similar to my previous role, but in a different company. I wrote about the reasons for my switch here, and can now say with confidence that it was the right decision. Despite the difficulties associated with working from home when starting a new position, and the fact that I hadn't physically met my boss until the day I was hired, it all worked out in the end.

My colleagues are great, and I love being able to bounce ideas off and learn from them. I got assigned to a huge project within my first week, which was intimidating, but my boss assured me that it was simply a vote of confidence - that they knew I would be up for the task. I've been working as the lead developer on that project ever since, including lots of communication and work directly with the client. It's been an exciting experience to basically be in charge of a large project for a huge corporation, and I've learned a lot from it already.

Another big focus of 2020 has been growing my audience and networking with developers online. I started taking Twitter seriously around May, and have since then accumulated over 7000 followers. I continue sharing helpful advice related to front-end development, navigating a career in tech, and landing development jobs. I strongly believe that being a developer is 90% having the right mindset. Seeing every failure as an opportunity to improve, learning how to learn, and being able to communicate efficiently are all key traits to being a great developer.

I use Twitter and this blog to share my own experiences, insights and lessons from the field to help others master these topics as well.

Halfway through the year, I decided to also add email as a distribution channel for my content. I had read a ton about the importance of email marketing for content creators, as it's traditionally one of the best converting channels. But simply creating a sign-up form on my website and expecting people to hand out their email did not work well for me. I needed a way to encourage people to sign up, by providing them something valuable in exchange for their email.

So, one seemingly random evening, I had an idea. What if I created an email series, with 5 emails, each with advice on becoming a better developer and landing a dev job. People would sign up, and get the emails delivered to them over the following weeks. This seemed promising, but I wasn't sure it was even something people wanted. So, using my audience of about 2000 followers at the time, I made a tweet to gauge the interest: 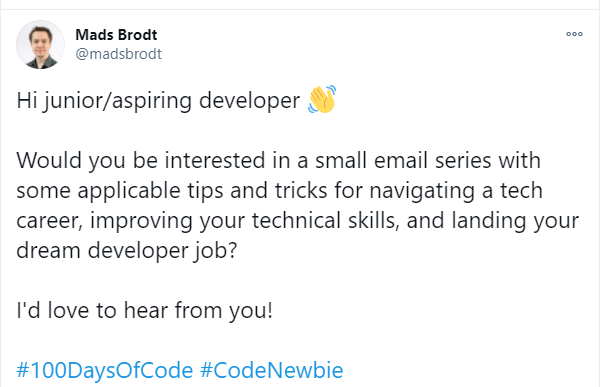 Not expecting much, I left the computer for a few hours. When I came back, you can imagine my shock:

Literally hundreds of people replied, showing their interest in the series and asking where they could sign up! I scrambled to make a quick landing page, added the link to the original tweet, and responded to every comment with the link as well:

Within 24 hours, over 1100(!) people had signed up. I was completely blown away, and spend the next couple of days actually writing the emails (which I had given very little thought beforehand 😂). The feedback was great, and even today people are still signing up!

This whole experience really got me hooked on using Twitter and email as channels to share my content and advice. I had now seen, first-hand, the speed and range possible on social media - and I'm not planning on slowing down anytime soon 💪

Writing and publishing an e-book

The Junior Dev Tips experiment proved to be a huge success, but I still had a lot more to say on the topic of becoming a better developer, landing a job, and just generally having a successful development career. I also thought that people would benefit from my point of view, since I went through many of their struggles not too long ago. Combined with the fact that I had always wanted to write a book, the idea of Mastering the Coding Mindset was born.

I created a new landing page with an email sign-up form and a few bullet points of what the book would be about. I also included a sample chapter (the first one I wrote!) to anybody who signed up for updates.

I spent the next 2 months planning, writing, and editing the book (while working my full-time job, which was intense 😅). I continued sharing sample chapters to anyone who showed interest in the book, and frequently posted snippets on Twitter for feedback.

I approached the writing process as structured as possible: I outlined sections and chapters, wrote a few bullet points for each, and only started writing when I was happy with the overall structure and content. Some chapters were added while others were cut, but the outline really helped me focus on just writing. I employed a habit of writing at least 1 chapter every day. More if it felt right, but at least 1 every single day. This helped me have steady progress, and with 35 chapters, writing took about a month.

I chose Gumroad as my publishing platform. I've seen many creators sharing their great experiences with Gumroad, and it's an incredibly easy platform to publish on. Kind of a no-brainer.

Leading up to the launch date, I was scrambling to finish the book and the sales page. I also questioned who would even buy a book like this, and maybe I was being stupid for writing it in the first place. I'm not an author, why should people buy a book from me? Luckily, I had read enough launch stories to realize that this is a completely normal feeling. So I went ahead and launched as planned, on August 13th.

The launch went pretty well, with about 1000$ in revenue in the first few days. If I'm being honest, my own unrealistic expectations made this feel like a let-down. The aforementioned launch stories often had people making huge amounts of money, which I was obviously hoping would happen to me. So when it didn't, I felt disappointed.

Looking back now though, I've no reason to be disappointed.

These are the overall stats of the book. With 73 sales, 1800 dollars in revenue, and about 70 hours in total spent on writing, marketing etc., that amounts to 25$ per hour. Which is pretty damn good considering the fact that this is a product I made, completely from scratch, that random strangers on the internet chose to pay money for. And the revenue can only go up from here as my following grows and I create more products in the future. So all in all, I'm quite proud of the book and its performance 🔥

2020 was weird. For the world, and for me on a personal level. Professionally, however, I'm quite happy and proud of what I've achieved in such a difficult year.

I'm not a huge fan of setting goals, as I find too many external factors play in that might prevent you from reaching that goal. And if you reach a specific goal, what then?

What if you don't even reach it in the first place? Are you a failure?

I prefer thinking in directions and systems instead. So, in 2021, I'm gonna continue growing my audience (direction) by sharing helpful content on topics I care deeply about (system):

Thanks for reading - and happy new year 🎉